Last week we expected a low leading to a base formation and then an up move towards Feb 26, Full Moon. 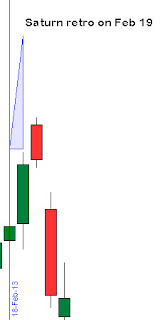 Here is what happened. Nifty bounced and just one day after Saturn retrograde, it had topped out and had three continuous days of decline.The up move which we had expected to Feb 26, is yet to materialise.  Since Monday is a day ruled by Ketu star and since Moon is in Leo, we may expect the bounce to happen on Monday. Global cues are also positive as of now.
However February 27th, with Moon in Virgo,and a Full Moon Deviation period running it would be prudent to watch the market and get out of short term longs.From then till Moon is in Scorpio, we may see the down trend resuming. That also happens to be March 04, 2013.
This date has a technical significance.
Let us see the technical pictures...

Twiggs Money flow Indicator has turned down quite significantly on weekly charts. With the negative divergence beginning to play out, this down trend has some more legs to go, short term bounces notwithstanding.
Let us see the wave counts on the daily charts.We can see the down trend has just begun..The larget boxed in terminal pattern is yet to play out. 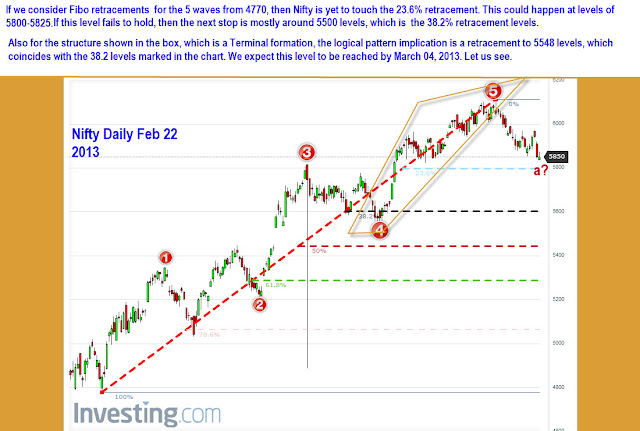 However, in the hourly charts, the terminal formed by just the fifth wave alone, has satisfyingly played out and we have reached the 5850 area. Maybe we may go down to 5825 zone before we have a bounce now. Or the bounce may happen  from wherever we are.... 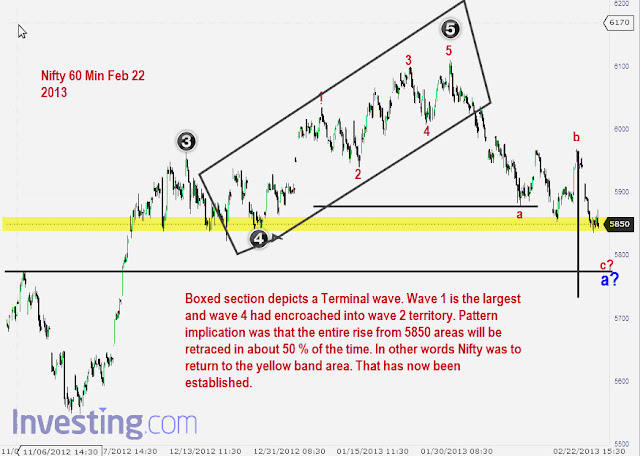 Truth of the matter is that all such bounces need to be sold into and we wait for Nifty to move to 5500 levels.
Negativity is accentuated by the swarm of planetary aspects this week, notably the Mercury-Mars conjunction trine with Rahu and Sun& Moon  square Jupiter.
Since Jupiter is still in Taurus, we may expect the market to recover one more time  towards 6000+ once it has reached the 5500 levels.
Post Budget should be an interesting scenario.
Since the planetary aspects in the coming two weeks are quite treacherous including but not limited to Mercury retrograde, it is very necessary that all positions be covered with stop losses. Also double check your buy or sell orders, for quantity and to prevent wrong entries.