This bull market from 2009 has been about liquidity.
The bull market which ended in last quarter of 2007-08 was all about cheap liquidity being pushed into the hands of the Public by Bankers and Insurance Companies.
The Bankers overdid the whole stuff, created sub primes and blew the whole stuff out of the water.
This Bull is all about cheap liquidity being pushed by Central Bankers onto the Financial Institutions and Retail Banks.
In other words, the very culprits of the last bull market had been handsomely supported with cheap money by the Central Bankers!
For the first time Yellen and Draghi are talking about reining in the Balance sheet..and stop its expansion.In other words they are talking about closing the tap..
We who follow the markets need only to first follow the Big Fund movement to understand the big picture...

Money which was relentlessly flowing into the Us Bond Market is now slowly moving out..Once the yield breaks the trend line we will know for sure that the Bond market has finally topped out...
A goodish portion has been flowing into the Equities markets of the US & A, but there has been flows to markets outside USA as well...at least that is the sense we get when we see the Dollar Index.. 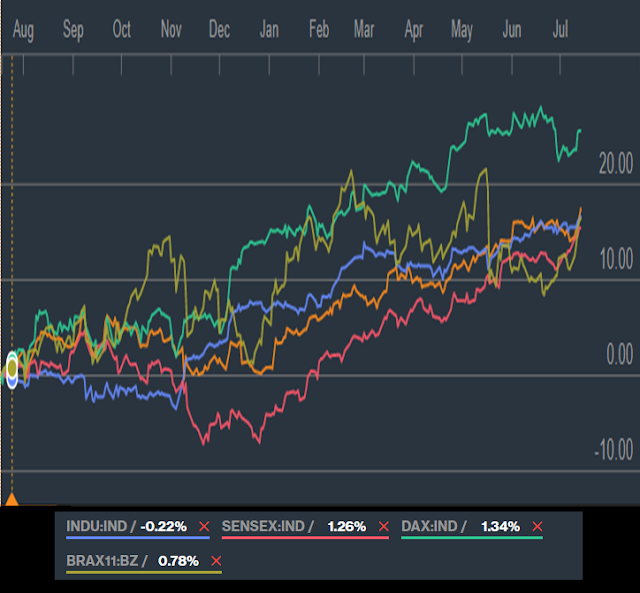 Clearly Emerging Markets seem to be benefiting.
Indian Markets have an additional angle to them..
Liquidity being provided by Mutual Funds..
Apart from FIIs.
So just keep watching break out stocks  especially large cap and those which attract huge volumes...Therein lie the best bets.
Posted by Tekkiesuresh at 11:55:00 PM