This week we are entering quite a crowded stellar zone with several significant astro phenomena beginning to come up.Some weeks back we had discussed how the absence of Jupiter is not giving the full filip to the Banker`s action across the globe.With first Mercury, and then Sun, have got into a square-opposition situation with Pluto -Uranus axis.Later this year,Venus  and Mars also will get into  this act-the debt issue still looks complex and eluding a solution.
The important long term saving grace is supplied by Rahu and Saturn.Rahu is moving in Jupiter star now and has caused the commencement of  its 18 year economic cycle. When Rahu comes into ints own star, later this year, markets may  see significant corrections. This could coincide with exalted Saturn turning retrograde.Venus and Sun both passing through respective debilitation points.It looks like we have trouble brewing in November for markets world over.
However, October should be good..
Let us see the transit chart cast for October 01, 2012, the month beginning. Lagna falls in Libra, ruled by Venus. Venus is in the tenth house, in Ketu star.Ketu itself is in another kendra, the seventh.Seventh lord,Mars is powerfully positioned in the First House or Lagna.This provides great energy to the markets.This may be translated as volatility.The next Kendra house, the fourth has Saturn as its owner and Saturn is in the twelfth- not a great situation. But being in exaltation and being in Mars star, it has great propensity to do good.Moon in the sixth,Rahu in the lagna,Sun in its own house in 11th all bode well for the markets. 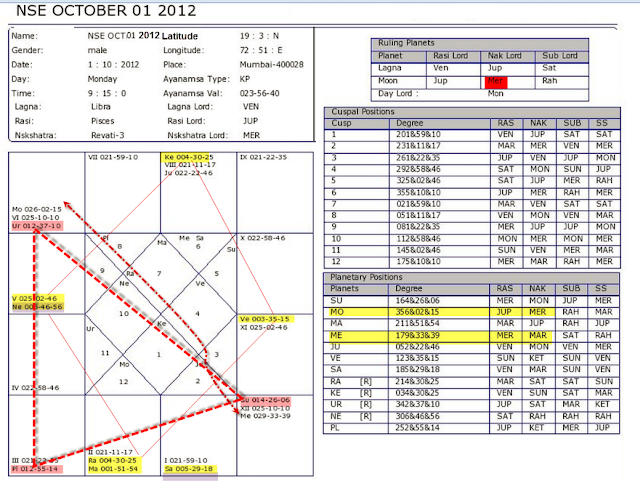 What then are the negatives?
Jupiter positioned in the 8th,Mercury in the 12th and Uranus in the 5th are not very good. Mars forming a conjunction with Rahu is also bad.This conjunction also forms an unholy alliance with Venus and Neptune. See the thin red lines. This formation is called a Grand Square and it spells trouble.
What kind of trouble?Rahu- Mars conjunction is happening in Scorpio ruled by Mars and a water sign. This signifies trouble in the Middle East. Since Venus is square to this formation, this trouble can have economic ramifications, affecting markets. Since Neptune is involved, such economic pressures could come from the supply or price of crude.
Since Moon will soon form an opposition to Mercury ( which has moved off its exaltation and is in the fag end of Virgo and hence weak), we may expect economic news which will have emotional angles, like for instance, higher taxes and hence public dissatisfaction or austerity measures leading to protests.
But the positives seem to out weigh the negatives.
Moon`s declination picture indicates that the market could get into a green zone from October 04 onwards. 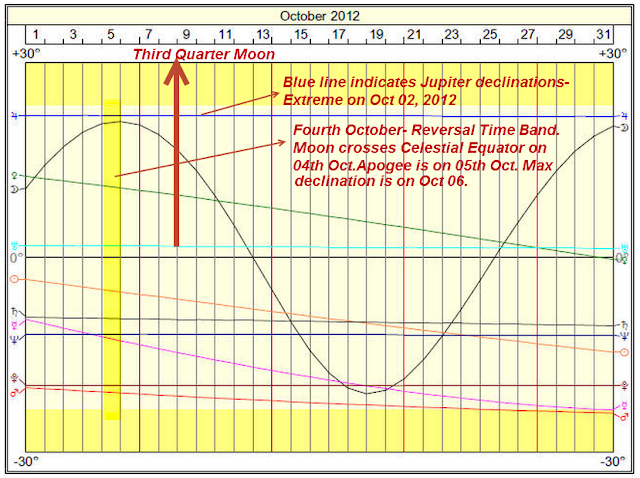 October 01, which is ruled by Mercury could see prices softening, but October 03, ruled by Venus could see Nifty improving.October 04, is a Sun day and may be mixed. Mixed because Sun`s heat is cooled off by being in Moon`s star.October 05 may see profit taking because of Jupiter Moon effect, but that is only an opportunity to take on more longs and not to go short.
What do the waves say?
See the charts..They are self explantory: 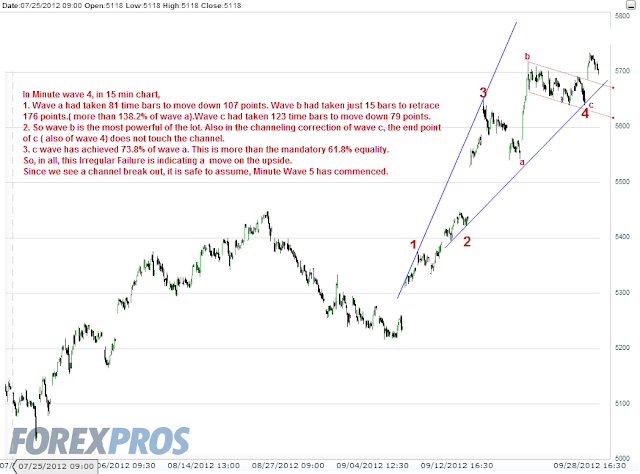 We shall examine Gann applications in more detail in future posts. Here is a chart of Weekly Nifty Futures with Gann levels:

Thanks a lot to all my friends for your comments and encouragement. Have a great month of trading!
Be prudent, do not anticipate, wait for market to show the way,have stoplosses always and you will become happy!